100 Things To Do Before High School Wiki
Register
Don't have an account?
Sign In
Advertisement
in: Objects

Pop Tiger is a type of magazine.

Not much is known about Pop Tiger except that it is a magazine most likely targeted toward tweens and teens. They also have a website.

Get the Most Out of a Sick Day Thing!

Pop Tiger is one of the magazines CJ's parents place on her bedside table for her entertainment since she is sick.

CJ is seen with Pop Tiger magazines and also visits their website for information on meeting Anthony Del Rey. 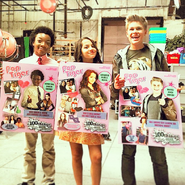