100 Things To Do Before High School Wiki
Register
Don't have an account?
Sign In
Advertisement
in: Objects

Become a Millionaire and Give It All Away Thing!

Pootabucks are used as a reward system and are generated and offered by Pootatuck Middle School. It has been used at the school since at least 1982. The word "Pootabuck" is a play on the school's name.

Pootabucks are given to Pootatuck Middle School students for good behavior. CJ states students can earn them by behaving well in school, completing extra credit projects, getting good grades, and helping a teacher. Pootabucks have been in use at Pootatuck since at least 1982, as this was when Alfred J. McSorely, an outstanding student, attended and accumulated a million of them.

Students may spend the Pootabucks on school supplies such as composition books, rulers, and various toys. If one presents Henry Slinko with ten Pootabucks, they are allowed to forgo a homework assignment. The principal prior to Principal Hader also gave students the option of attending Sir Soaky's Typhoon Splash City Water Park Lagoon by limousine with eight of their friends if they collected 5,000 Pootabucks.

Become a Millionaire and Give It All Away Thing!

Mr. Roberts tells CJ, Fenwick, and Crispo Powers the story of how Alfred J. McSorely earned a million Pootabucks and hid them somewhere on the school's property. Though CJ is skeptical of the rumor, mainly because she is concerned with finding her and her friends' missing Pootabucks, Fenwick and Crispo are determined to find it.

CJ finds out that Mindy and her friends had taken her Pootabucks and spent one hundred of them, so she goes around to make up the money. She is successful and hides the money in a new place - the empty science room vent. A custodian gets the vent working properly again, however, and her newly reclaimed Pootabucks fly out of the vent and onto the ground where many students retrieve them. CJ then decides to help Fenwick and Crispo look for McSorely's stash so she and her friends can go to Sir Soaky's. With help from Mr. Roberts, they find the money and generously offer to take the entire seventh grade to Sir Soaky's. 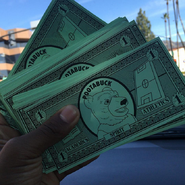 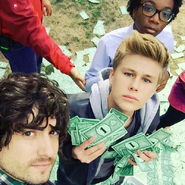 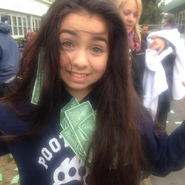