100 Things To Do Before High School Wiki
Register
Don't have an account?
Sign In
Advertisement
in: Pages with reference errors, Citations needed, Main cast,
and 6 more

Isabela Merced (born July 10, 2001), born Isabela Moner, is an actress, singer, and dancer. She portrays CJ Martin in the 100 Things to Do Before High School series.

Merced was born Isabela Moner in Cleveland, Ohio, to Patrick Moner, a firefighter, and Katerine[1] Moner, who is Peruvian. She has an older brother named Jared and a younger brother named Gyovanni.

Merced made her Broadway debut in Evita at age ten. In the same year, she was a featured singer on The Next Big Thing: New York, her television debut. The following year marked her film debut in director Henry Barrial's The House That Jack Built.

In 2014, Merced landed a recurring role in NBC's short-lived television show Growing Up Fisher and a voice-over role in Dora and Friends: Into the City. She made her Nickelodeon debut in the 2014 movie Splitting Adam.

She booked the lead role of CJ Martin in 100 Things to Do Before High School, which premiered in 2014 before starting its original run in 2015. 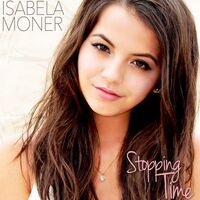 In September 2015, she released her twelve-track album Stopping Time. It includes the single "Dream About Me." There are covers of popular songs as well as original songs.

In November of 2015, Merced was attached to Jame Patterson's Middle School: The Worst Years of My Life book-to-movie adaptation. It began filming in November 2015 in Atlanta, Georgia, and wrapped in January 2016.[2] It was released on October 7, 2016.[3][4]

Merced performed the National Anthem on January 3, 2016 at the Arizona Cardinals vs Seattle Seahawks game.[5]

Merced was reportedly being eyed for the lead role in Michael Bay's fifth Transformers movie.[16] She later confirmed on her Twitter and Instagram accounts that she is set to star in the film.[17][18] She also revealed her role in the animated movie The Nut Job 2 on Twitter in July 2016.

In February 2018, Deadline reported Merced had been cast in Instant Family,[22] which reunites her with former Transformers costar Mark Wahlberg.

In May 2018, Variety reported that Merced will be portraying Dora in Dora and the Lost City of Gold live action movie based on the Nickelodeon animated show of the same name. It will be filmed in Queensland, Australia.[23]

In 2019, her first single is “Papí” due to her Peruvian Heritage

Her family still lives in Cleveland, but Isabela splits her time among Los Angeles, New York, as well as Cleveland.[29]

Some of her hobbies are skiing, snowboarding, skating, jumping on the trampoline with her brothers and hanging out with friends.[30]

She began dating Henry Danger star and her Splitting Adam co-star Jace Norman in April 2016.[31] In November 2016, Norman confirmed they had split after seven months of dating and are just friends.[32]