100 Things To Do Before High School Wiki
Register
Don't have an account?
Sign In
Advertisement
in: Characters, Male characters

Anthony Del Rey is a Latin singer. He is portrayed by Anthony De La Torre.

Anthony is a Latin singer. He has been seen in Pop Tiger magazines and was even featured on the cover of the May 2015 issue.

He is shy. He also shows gratefulness at Mr. Martin fixing his foot and agrees to sing for CJ to repay him.

CJ learns that Anthony is having an exclusive, invitation-only concert in town in collaboration with KBlast and she tries to find a way to get a ticket. She becomes upset when she realizes there are no tickets, but Crispo mentions that Mindy had one and was going to give it to a Mindette. CJ then becomes a Mindette and Mindy chooses to give the ticket to her after a series of tests. Mindy is too demanding with her father, however, and he decides to not give her the tickets.

Mrs. Martin tells CJ they could wait behind the theater where the concert is taking place so CJ could meet Del Rey. CJ invites Mindy to wait with them, but Mindy ruins CJ's chance of meeting Del Rey when she chases after him with a pair of scissors in hands, hoping to get a lock of his hair. Mrs. Martin and CJ head home, CJ sad she didn't get to meet Del Rey, but she notices that he and his band are sitting in her living room. He has his foot in a medical boot and tells them he had broken it running from Mindy. Anthony decided to sing for CJ because he appreciated Mr. Martin fixing his foot so well. 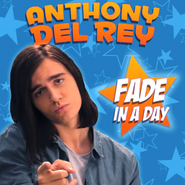